How To Repair Your Piano 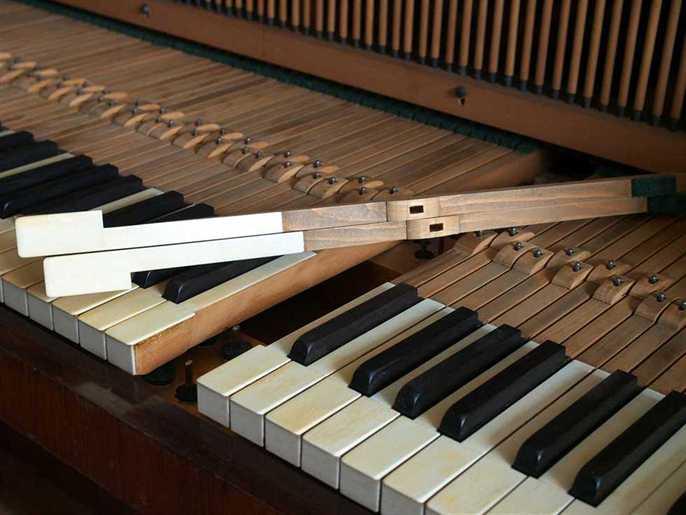 The piano may be your vessel to create beautiful and unique music. If there are problems with your instrument, you won’t be able to produce the elegant sounds that your heart sings with. In this post, we’re going to cover common problems that pianists encounter with their instruments. We will include some basic solutions, but many issues will require that you call in a professional piano repair person.

The key is stuck down.

You begin to play your favourite piece, only to discover that each time you strike a key, it stays depressed rather than springing back up. The issue can be with the lever beneath the key; you’ll know this is the case if the key itself springs back up, but when you play it, no sound is produced. This problem makes it impossible to use your instrument and requires an immediate fix. How do you do it?

Humidity is a common culprit behind these sorts of issues. Grand and upright pianos are made of wood, which means that the material swells under damp conditions. This is one reason why you need to take care when cleaning the instrument; if you use too much water, it can warp the keys (which are made of wood). Only the topmost layer is white plastic or ivory). On a particularly damp day, the keys may become sticky. Consider setting up a dehumidifier in your piano room or set up a hot lamp near the instrument to bring down moisture levels.

Keys are sticking to each other.

Have you ever played a single note, but your piano produced two instead? Even when you wiggle the keys, they remain stuck together. You’ll need to open up your piano to get a closer look at what’s going on.

There may be a substance that’s causing the jam, like food or crumbs. After years of playing, the oils and dirt from our fingers can slip between the cracks and cause stickiness. It can damage the pins within the levers that help the key return to its resting position. When the pins are exposed to dirt or spilled liquids, they accumulate rust. To remove it, you can buff them with an abrasive material. Alternatively, you can purchase new centre pins and replace the rusted ones.

Beneath the key lever is a strip of felt, which is used to help the keys move freely. Over time, this felt can cause the lever to jam; it may become dislocated or swollen. There are a few options that you can do here: one is to gently shave the felt, either with a thin razor or a file. If the felt is folded over, use a small dollop of glue to hold it in place. This should free up your keys so you can play them as you desire. If the piano has been played for many years, the felt may be worn away completely—in that case, you’ll need to purchase a replacement.

The hammer is faulty.

The hammer is what bears down on the strings when you play a note. It’s an integral component to a high-performing piano. All sorts of issues can arise with this piece of equipment. Let’s go over a few of the most common problems and how you can repair them:

The tuning pins are loose.

A loose pin won’t be able to hold a tuned string; despite your diligent efforts, it will slip back to being out of tune again in no time. The sound that this problem produces is particularly unpleasant; you’ll know it when you hear it. It’s twangy, sour, and horribly out of tune. What can you do? A piano tuner can help diagnose your issue and find the specific pin that’s causing the problem. They can tighten it with the proper tools and then re-tune the affected strings. Or, they can try to treat it using a liquid that fills spaces in the wood, tightening the pins that way.

The notes won’t sustain, or they sustain too long.

Certain songs require resonance to hold notes, while needing to cut others short. If you find that the note cuts off as soon as you lift your finger, or it plays for too long, your damper strings may be to blame.

When the note hangs for longer than it should, the damper springs are usually the reason. The springs are what put the damper back to its original position after a note is played; if the springs are damaged, the damper will remain on the strings and sustain the note for too long. You will probably need to contact a repair person to replace the springs. Alternatively, there may be an obstruction that’s blocking the damper—remove it to restore the piano’s functionality.

What if the note won’t sustain at all? This is probably due to the sustain pedal. It may need to be realigned or adjusted.

You start to play a classic melody, only to discover that something isn’t quite right. What’s responsible behind that odd noise? Here are a few possible problems:

And finally, some general advice to avoid all of the above issues: play your piano often. Frequent use will prevent many of these problems from occurring. Playing the instrument more often will be good for your wallet and your brain; it’s a win-win situation.

It’s always fun to try a new piano. If you’re in the market for a new instrument, Academy of Music has a great selection of pianos to choose from. We offer grand pianos, upright pianos, and digital pianos from high-quality brands like Kawai and Casio. Call us today and we can help you find the perfect instrument for you and your family.